"Before the war my childhood was filled with friendships and laughter. The war took that all away. Even my parents have been taken by war."
As part of my long-term documentary work examining different forms of human trafficking, this project focuses on exploitation as a result of war. In conflict zones around the world, women and children are exploited as soldiers, forced into domestic servitude, and even taken as sex slaves. In an effort to document this issue I traveled to Imvepi refugee settlement in Uganda, where over 123,000 refugees are fleeing the civil war in South Sudan. I wanted to explore the UN Convention on the Rights of the Child and the ways we see children and women affected by exploitation due to war. Through personal narrative, portraits, and real-time photo capture, the project documents survivors' lives as refugees in Imvepi as they learn, heal, and try to survive the devastating impact of war.

Ann poses for a portrait in the Imvepi Settlement in Northern Uganda on February 2020.
"Child Soldiers" is a portrait series of four survivors who suffered prolonged and repeated trauma as a result of conflict displacement child trafficking. The women reflect on their experiences, the way they have been impacted, and the challenges of reintegration into society in the Imvepi Refugee Settlement in Northern Uganda. The project aims to advocate for increased access to psychosocial support for the survivors.
In 2013, conflict broke out in South Sudan, leading to a complex and dangerous situation of armed conflict, economic decline, disease and hunger. Both sides of the conflict are responsible for abducting thousands of women and children to be used as weapons of war.  Although exact figures are hard to determine because of insecurity, UNICEF estimates that 19,000 children in South Sudan have been abducted into armed forces used as armed soldiers, sentries, informants, spies, domestics, laborers, and sex slaves.  ​​​​​​​

Ann poses for a portrait at an empowerment session organized by a local non profit in the Imvepi Settlement in Northern Uganda on February 2020. 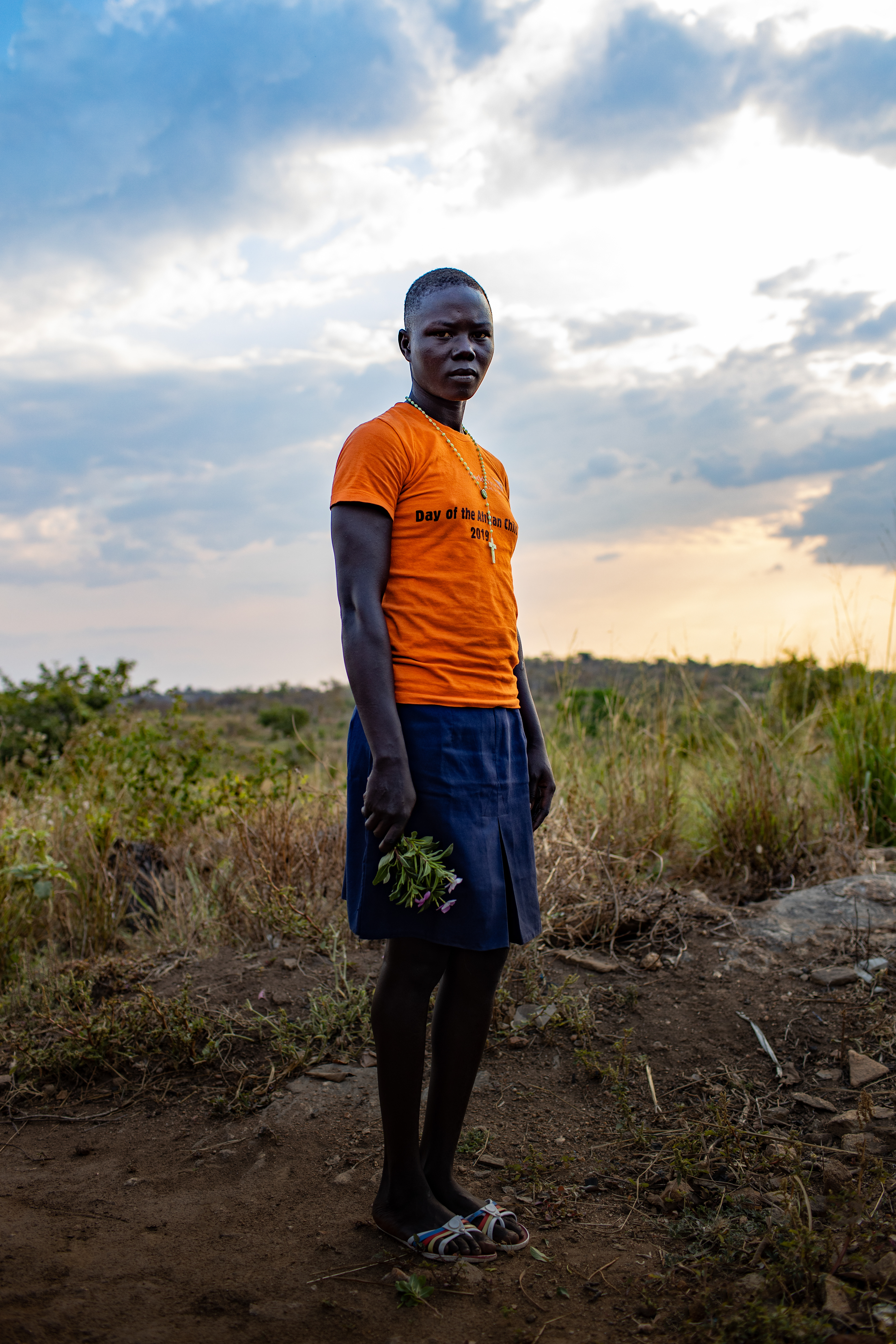 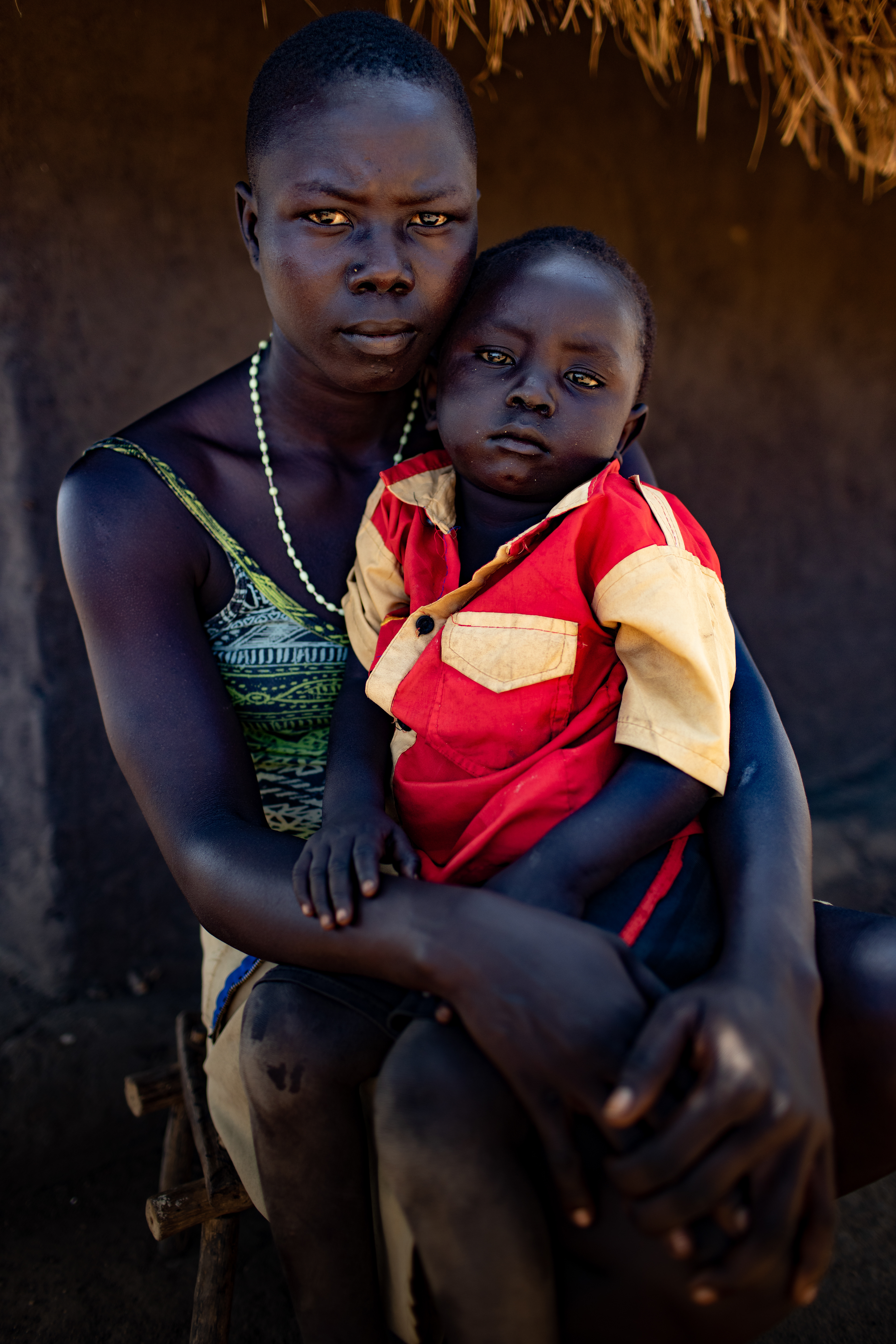 Ann and her son at their home in the Imvepi Refugee Settlement in Northern Uganda on February 2020.
In 2016, at the age of 15, Ann (not her real name) was abducted by a rebel group and was trained as a soldier for 3 months.  During this time, Ann was forced to do things against her will under threat and violence.   "It was unimaginable, and I cannot describe to you that time in my life.  It is too painful for me to go back there in my mind.  When the war started my family and I boarded a bus going to Uganda.  The bus was intercepted by the rebel army and I was taken.  After my kidnapping, I was forced to walk many miles and repeatedly raped.  I was forced to witness people being killed.  It's been two years since my escape.” ​​​​​​​
Ann had a child with a rebel soldier who took her as his 'wife'.  She was appointed as a sentry in the bush to patrol.  One night she took the opportunity to escape.  On foot it took her 3 weeks before she arrived at the border in Uganda.  She stated, “the journey was very difficult because I was very frightened, and my child was always hungry. I don’t miss South Sudan because there you only hear of death and the killings.  Now my life is secure, and I want to put the past behind me.” ​​​​​​​​​​​​​​

Sabrina poses for a photograph in her doorway in the Imvepi Refugee Settlement in Northern Uganda on February 2020.
“The war has ruined me forever.  I hear the screams.  I am a broken person. “Sabrina (not her real name) is a twenty-year-old mother of two and has lived in the settlement for 2 years. She travelled from South Sudan to Uganda, it took her two weeks to reach the boarder then another one and a half months to reach the settlement.
In South Sudan, she worked as a cleaner for the Ministry of Defense.  Her work there was happy, and she was satisfied.  When the civil war broke out and the rebels were getting closer to her home, she and a family friend planned to travel together to Uganda.  She boarded a transport intercepted by a rebel group.  She was then taken by the rebels.  In rebel control she was trained as a soldier and forced to do things against her will.  During her captivity she connected with a relative in the rebel group who helped her escape.  She fears going back to South Sudan due to the fear of being recaptured and punished. ​​​​​​​
Living in the Imvepi Settlement, Sabrina has to walk up to three kilometers to get water or firewood, this is an unsafe journey and alongside that she fears the men she may meet along the way will harm her. She feels security is needed during both the day and night. Regardless of the good lighting in the settlement men continue to confidently harm women. Due to Sabrina’s experiences the settlement hospital prescribes her medication for anxiety and trauma, but she has a difficult time trying to get this medication. An aid organization provides psychological social care, but Sabrina says that she still experiences pain when she thinks back to her past. The aid organization also runs a soap making empowerment workshop that Sabrina attends and she now aspires to one day have her own business that sells her home goods.

Tonia poses for a photograph in her home and walking with food collected from the Word Food Organization program to her home in the Imvepi Refugee Settlement in Northern Uganda on February 2020.
Tonia (not her real name) is a nineteen-year-old with two children, the father of the children is a rebel soldier in Sudan. Tonia is a former child soldier.  She was abducted by a rebel group at a market in 2015 at the age of 14.  In rebel control she was trained for 3 months and taken to the bush where she was forced to do things against her will.  She was able to escape Sudan, but it was a struggle which she faced feeling fearful along with children who were hungry.
The World Food Organization provides food and Tonia sells her portion so she can one day buy linen and a bed, this results in her starving herself. She also feels lonely and struggles to sleep. A non-profit organization that provides support to refugees, assists Tonia by providing psychological counselling and she says that having someone to give her emotional support nourishes her soul.
The settlement provides education for her children, but Tonia does not know how she will pay for the service. She wishes she was able to go to school too but she says she must forget her ambitions because she has to focus on her children’s success.​​​​​​​
Tonia also is affected by the shortage of food, water and firewood. She also does not feel safe as a women and fears rape. She says that their culture dictates that if a woman is raped, she must then marry that man because they have had “sex” which causes extreme trauma for the victim. 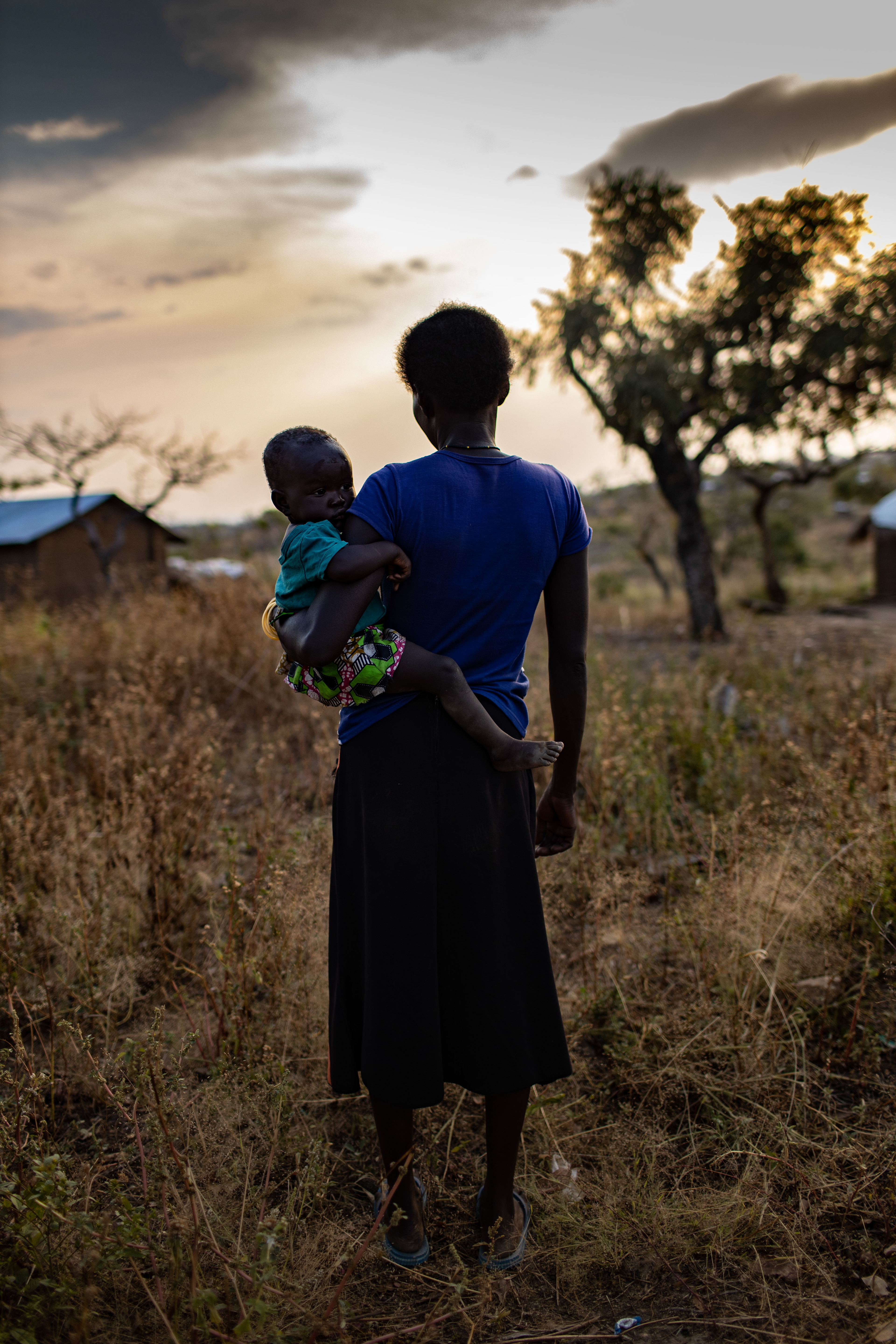 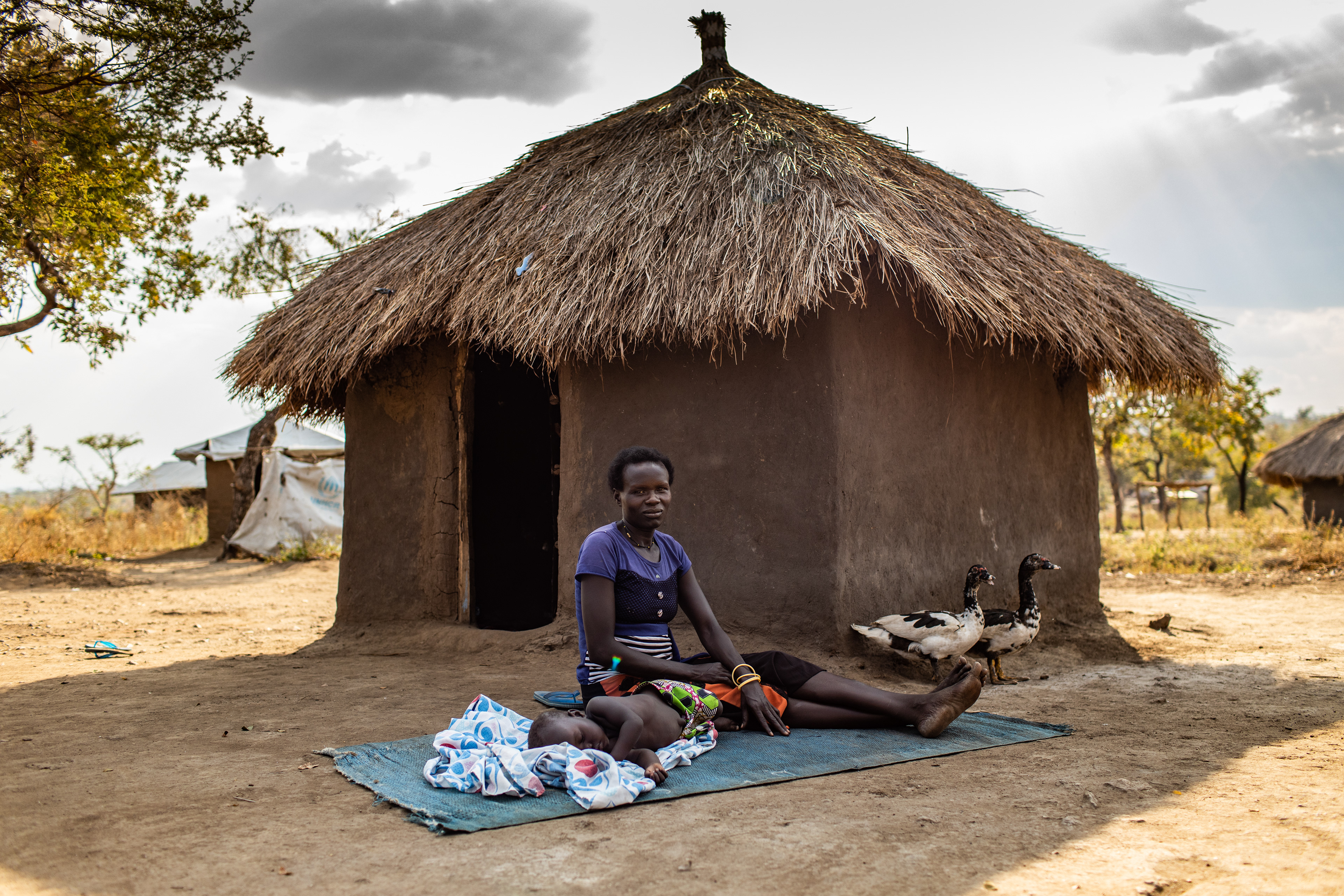 Nadia poses for a photograph in her home in the Imvepi Refugee Settlement in Northern Uganda on February 2020.
A twenty-year-old woman named Nadia (not her real name), a former child soldier, lives in the Imvepi Refugee Settlement and built her house there along with the support of the UNHCR. She said that she found the settlement to be peaceful but the cuts in the food rations is most concerning. Collecting water has also been a challenge because of the shortage; it may take up to four days to receive water and when water is available she must walk two kilometers which she is only able to do during the day because she fears that going out at night is dangerous for any women.
As we all can imagine water is an essential for almost all household activities, cooking, drinking and cleaning. It is vital now more than ever that hygiene is practiced but without water it simply isn’t possible.
Nadia also speaks of the dangers when collecting firewood. She never travels alone to collect wood as she fears getting raped. A common problem that all women have in the settlement. Men use firewood to manipulate women to have sex with them in exchange for the wood. Firewood is an essential part of survival, but the land is scarce leading to people having to compete for the wood. ​​​​​​​
During my time reporting for this series, I was hopeful for the woman.  I didn't want to dwell on how the women had escaped slavery and forced to do unthinkable things against their will.  I felt it was unnecessary to talk too much about their past.  Part of moving past trauma is to envision a better future.  Mostly, we spoke about the struggles they face in their new lives and about their aspirations.   I spent my days bearing witness to their many hardships of daily life in the Imvepi Refugee Settlement, like cooking over fire, collecting firewood, and carrying water long distances. ​​​​​​​
As a result of this project, I learned, refugees have insufficient access to food, water and firewood. For men to abuse this lack of resources to rape and abuse women is simply unimaginable. Every woman around the world would be able to understand the horror of having to plan your day around avoiding rape. I can’t imagine what adding no water and not enough food to that list would do to a women’s mental and physical health. Although these women face incredible hardships, they are the lucky few who are able to access psychological services to help them work through the daily challenges of reintegration into society.
Learn how the US government plays a role in mitigating this form of human trafficking here: Open Society Foundation
Learn more about this social issue here: Child Soldiers, Slavery, and the Trafficking of Children
Learn about Child Protection here: UNICEF Report: South Sudan
↑Back to Top