Teen survivor of human trafficking waits at the Office of the City Prosector Manila City Hall, Philippines for her chance to prosecute her trafficker on September 2019.   "I'm still wrapped in disappear at times.  It's easy to sink back into depression and isolate myself from everything going on around me." ​​​​​​​
​​​​​​​
In the Philippines, children are sold into the cybersex trade by human traffickers who deceive them into believing that they will have a better life. Many victims come from rural, mountain villages and are intrigued by the promise of a well-paid job. They believe they are leaving their impoverished lives for an opportunity to earn money, but instead, become entangled in a nightmare.
A 2.5-hour drive through heavy Manila traffic brought 6 teen survivors of
human trafficking to the Office of the City Prosecutor for a preliminary hearing that could bring their trafficker to justice. The girls say it's worth it. For some of them, it's been a 2-year wait to get to this day. During the day each girl relives intense feelings of a painful past with the added anxiety of possibly seeing her perpetrator in court. Unfortunately, after a few hours of waiting the girls are informed their day in court has been postponed due to judicial inefficiencies. At that moment, tears fill everyone's eyes as the emotional toll of the day collapses on each of the girls.
Due to judicial inefficiencies, the nationwide shortage of prosecutors, and the reduction in the number of prosecutors assigned to anti-trafficking task forces delays are common. The Philippine National Police (PNP) and the Women and Children’s Protection Center budget increased in 2018, but government agencies continued to report inadequate resources for anti-trafficking investigations and prosecutions resulting in prolonged wait times for court dates. Even with donor support, the National Bureau of Investigation (NBI) Anti Human Trafficking Division has developed standard operating procedures for trafficking investigations, including victim care, and creating a specially equipped room for child forensic interviews the system is still slow making victims feel more and more invisible.

Two survivors of human trafficking walk toward the Office of the City Prosecutor Manila City Hall, Philippines on September 2019.
Survivors endure a wait time of up to 2-6 years for court a date to convict their trafficker, says Karen Navera, a Case Worker for Voice of the Free.  Karen has been a Voice of the Free (VF) Case Worker (formerly known as Visayan Forum Foundation) (VF) a non-governmental organization in the Philippines known for innovations in addressing modern-day slavery, especially human trafficking and the exploitation of domestic workers, for 15 years. ​​​​​​​ Working on human trafficking cases Navera knows first-hand what victims go through. 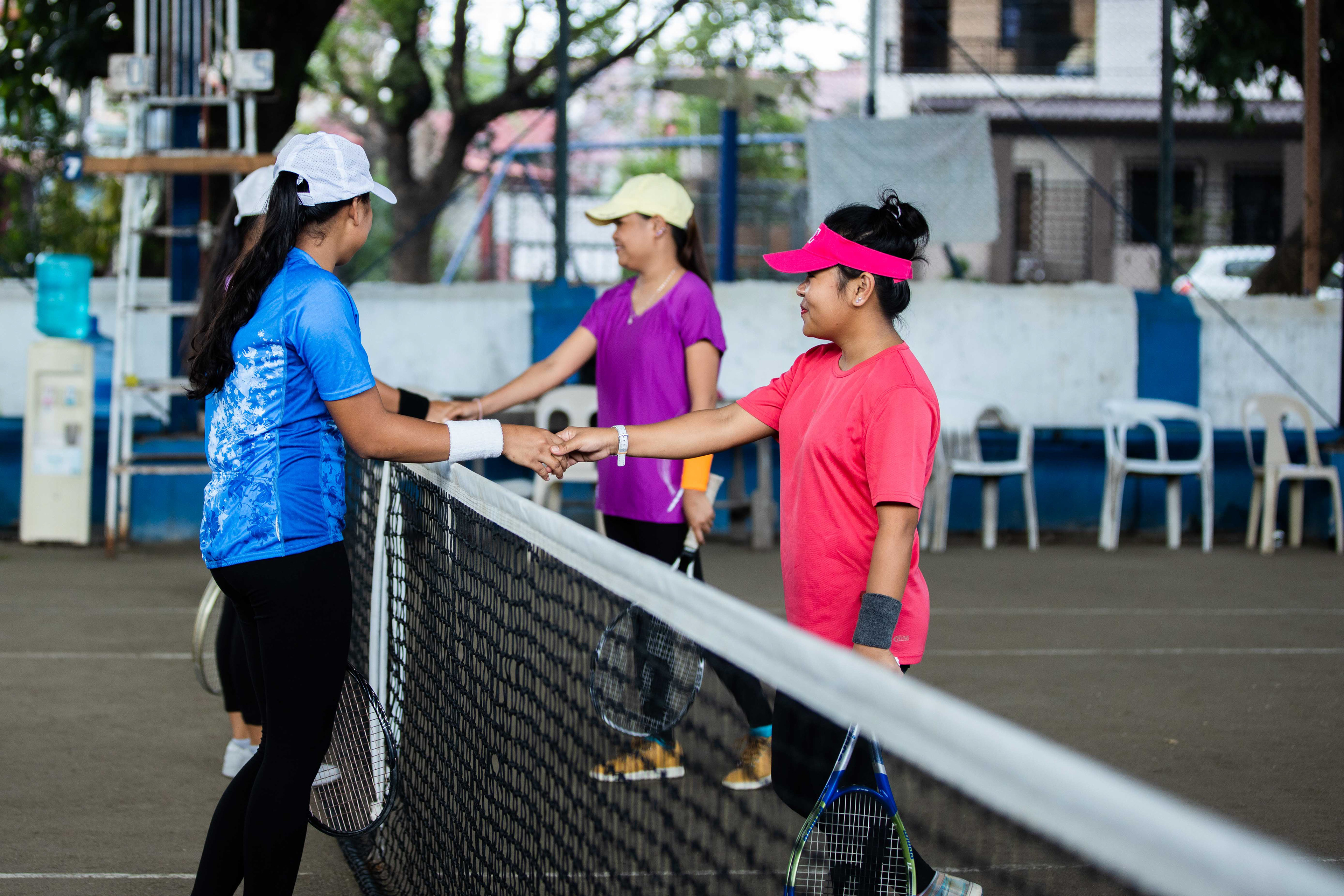 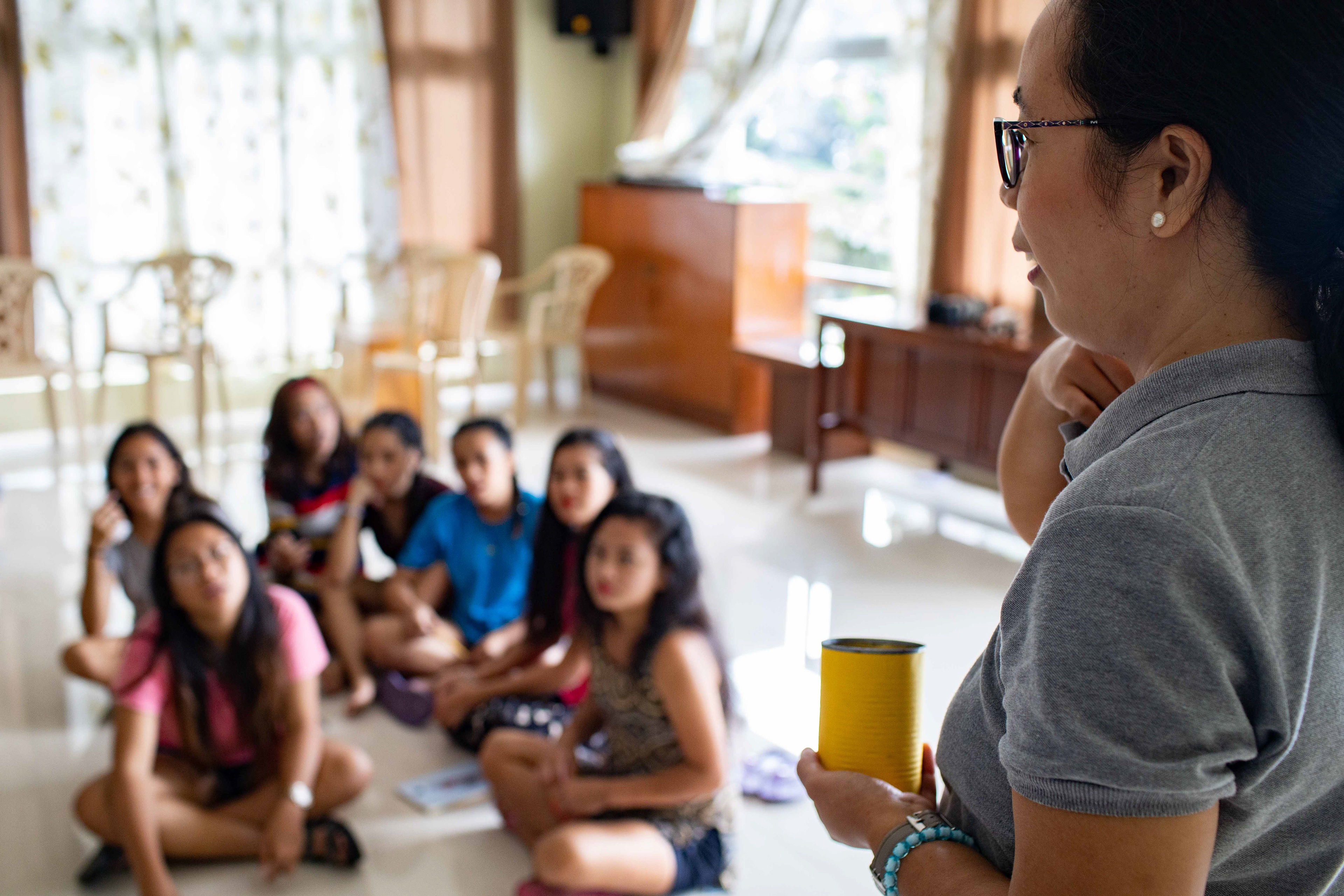 Human trafficking survivors engage in a tennis group wellness activity session and peer counseling with a VF Psychologist at the Center of Hope in Manila, Philippines.​​​​​​​
After the rescue, the victim is taken to the police station to file a report. At the police station, a statement is recorded. The victim is then given immediate trauma counseling and taken to a hospital for a medical exam. After an investigation is completed the victim can register for a day in court. During the waiting process for a court date, VF shelters the victim at a long- term living facility. While living at the facility, survivors receive shelter, psychological services, child welfare case management, education, life skills lessons, legal protections, advocacy support, and group wellness activities such as art, karate, and tennis.
Victims of cybersex trafficking go through irreversible psychological damage. VF practices a holistic victim care approach that ensures victim-witness protection and successful social reintegration. At the shelter, victims are treated with dignity and respect. They are given time to heal and given a choice to participate in peer counseling. Once ready they are given equal authority to run daily operations and share responsibilities. In addition to providing a safe home for victims facing threat and immediate trauma care support to child victims of sexual abuse, VF prepares the victims for court presiding by facilitating a victim's legal process from the registration of the case until conviction.
Most often the issue of reintegration with the family becomes a distant reality as families might be traffickers themselves. For these reasons, the VF rehabilitation program includes economic empowerment and civic identity guidance. All this leads to the successful integration of a survivor in the society. The length of stay in a VF shelter is individual specific depending on various factors including the legal status of the case, family acceptance, and family safety, says Navera.

Teen survivors of human trafficking walk together holding hands at the Office of the City Prosector Manila City Hall, Philippines on September 2019.​​​​​​​
How does cybersex happen? Roland Pacis, a Voice of the Free representative, during an airport seminar on human trafficking at the Ninoy Aquino International Airport on Sept. 25, 2019, stated, access to the internet is made easy. Everyone has a device. The crime is fueled by addiction, repeated posting, sharing, downloading of nude pictures. The customers easily pay to view children acting in sexual behavior in live shows and can be done on unregistered devices.
Across the country, online traffickers are now arrested and charged with non-bailable offenses such as human trafficking, along with cybercrime and producing child pornography, police are heavily focused on investigation operations. The Philippines is a global hub for child pornography and buyers are both foreign and local says, Paris.
​​​​​​​

Teen survivor of human trafficking waits for her court hearing at the Office of the City Prosector Manila City Hall, Philippines on September 2019.  "I feel nervous and afraid.  I've waited over a year to prosecute my trafficker."

Teen survivor of human trafficking waits for her court hearing at the Office of the City Prosector Manila City Hall, Philippines on September 2019. "I'm full of anxiety and can't wait for the day to be over."  Fifteen-year-old Marie (not her real name), after almost two years of being exploited by her trafficker, she was saved by the law-enforcers and DSWD Manila District through a rescue operation conducted last August 2017. Marie has been under the care of Voice of the Free for more than two years. She receives shelter, psychological services, child welfare case management, education, life skills lessons, legal protections, advocacy support, and participates in group wellness activities.

Teen survivors of human trafficking wait to be called for a court hearing at the Office of the City Prosector Manila City Hall, Philippines on September 2019.

16-year-old victim of human trafficking, embraces her case working in an emotional state of distress after being informed due to case congestion her case has been postponed. As more human trafficking cases involving online sexual exploitation of children reached the courts, these cases sometimes are continued due to difficulty in obtaining timely search warrants and inadequate resources for operational logistics, analysis and investigation of cybercrime leads, computer evidence forensic analysis, and courtroom equipment for presentation of videotaped evidence and testimony.

16-year-old victim of human trafficking, gazes out a car window after an emotional day at the Office of the City Prosector Manila City Hall, Philippines on September 2019. Ann (not her real name) was rescued from the online cybersex trade in Cebu City at the age of 9, Ann lives at the long-term shelter where she receives psychological care, builds relationships with other survivors, and learns self-care.​​​​​​​
Read more on Human Trafficking: 2019 Trafficking in Persons Report
↑Back to Top